British Land has partnered with London Design Festival for the fourth year, to celebrate and promote London as the design capital of the world and will host the festival at two of its London campuses. Broadgate and Paddington Central will be home to a range of design activities during the festival including installations, events and exhibitions open to the community.

Internationally acclaimed British designer, Paul Cocksedge, will create a major Landmark Project for the festival at Broadgate. The large-scale installation fuses innovation and technology. Responding to the changing rhythm of the community, its design features curves for people to sit on and walk under, further enhancing London's largest pedestrianised neighbourhood. Made from scaffolding planks, Paul Cocksedge is collaborating with Essex-based flooring company, White&White, to re-imagine and re-use the building wood. As part of the festival, British Land will collaborate with Shoreditch Design Triangle to host an exhibition and talks as well as a special Design Night at Broadgate.

Paddington Central will once again be one of the festival’s Design Routes and will include an installation by Paddington-born designer Adam Nathaniel Furman, who will enliven the Grand Union Canal with his signature vibrancy and impactful colours. Newly opened Storey Club in Paddington Central will become the Design Route’s ‘central hub’, and will host a curated programme of talks, debates and design salons, open to the community.

For the sixth consecutive year, British Land and London Design Festival will be honouring and celebrating those who have made a significant contribution to the world of design with the British Land Celebration of Design.

Chief Executive of British Land, Chris Grigg said: “Design is integral to everything we do at British Land so we’re delighted to continue our partnership with London Design Festival. Good design has the power to improve people’s wellbeing and we hope the week will be enjoyed by people across London.”

London Design Festival Director, Ben Evans said: “We are delighted to continue our strong relationship with British Land, as the Headline Partner to the Festival for the fourth consecutive year. Their ongoing commitment and genuine dedication to design supports our vision to celebrate and promote London as the design capital of the world.”

Our portfolio of high quality UK commercial property is focused on Retail around the UK and London Offices. We own or manage a portfolio valued at £18.2 billion (British Land share: £13.7 billion) as at 31 March 2018 making us one of Europe’s largest listed real estate investment companies.

Our strategy is to provide places which meet the needs of our customers and respond to changing lifestyles - Places People Prefer. We do this by creating great environments both inside and outside our buildings and use our scale and placemaking skills to enhance and enliven them. This expands their appeal to a broader range of occupiers, creating enduring demand and driving sustainable, long term performance.

Our Retail portfolio is focused on Regional and Local multi-let centres, and accounts for 48% of our portfolio. Our Offices portfolio comprises three office-led campuses in central London as well as high quality standalone buildings and accounts for 48% of our portfolio. Increasingly our focus is on providing a mix of uses and this is most evident at Canada Water, our 53 acre redevelopment opportunity where we have plans to create a new neighbourhood for London.

Sustainability is embedded throughout our business. Our places, which are designed to meet high sustainability standards, become part of local communities, provide opportunities for skills development and employment and promote wellbeing.

In April 2016 British Land received the Queen's Award for Enterprise: Sustainable Development, the UK's highest accolade for business success for economic, social and environmental achievements over a period of five years.

Broadgate is where innovation and finance play.

It is the largest pedestrianised neighbourhood in Central London: a diverse community connecting innovation and finance, and a public arena for new food, retail and culture.

Lying adjacent to the busy transport hub of Liverpool Street station and surrounded by Shoreditch, Spitalfields, Old Street and the City, Broadgate connects Europe’s capitals of investment and technology.

Joint owners British Land and GIC are investing £1.5 billion in Broadgate’s evolution into a world class, mixed use destination for London.

Their masterplan for Broadgate will deliver 4.9 million sq ft of new and redefined workplaces, retail and restaurants, bringing people together to work, shop, drink and dine.

Broadgate’s rare collection of public spaces combines the community and feel of the historic piazza with the energy of modern London. These spaces play host to over 100 cultural events annually, providing a showcase for emerging ideas and talent.

Paddington Central is an 11 acre, mixed-use neighbourhood next to Paddington Station in London’s West End. Located approximately 15 minutes’ walk from Oxford Street, Paddington Central has excellent transport connections to Heathrow Airport and Central London, soon to be enhanced by the arrival of Crossrail in 2019.

Since acquiring Paddington Central, owners British Land have invested significantly in its buildings, outside environment and retail offering. With the wellbeing of its workers and local people in mind, the campus’ green spaces and location alongside the Grand Union Canal offer an attractive environment to spend time before, during and after the working day and throughout the weekend.

The campus is home to a variety of interesting businesses, including global companies such as Microsoft, Kingfisher, Finastra, Vodafone and Mars. These businesses thrive alongside gyms, cafés, restaurants and bars including Pergola, West London’s largest al fresco drinking and dining destination, and floating eateries along the canal.

About Storey and Storey Club

Storey is a small business within a big business. The product has a clear vision: to create a new type of office space with a focus on adapting to different customers business needs. Working with award winning architects and designers, Storey has created a nimble and innovative alternative to the traditional leases for businesses that need their own private space with built-in flexibility.

Catering for both scale-up businesses requiring their own personalised space and larger organisations requiring a separate hub, Storey creates office spaces designed, branded and laid out exactly how you want, accommodating businesses with a requirement of 20 desks or more.

Newly opened Storey Club is an inspirational space exclusively available to Storey customers and others based at Paddington Central. With everything from additional meeting rooms, private dining venues and impressive event and workshops spaces with a distraction-free shared work lounge for when your team need an away-from-your-desk place.

Established in 2003 by Sir John Sorrell CBE and Ben Evans, London Design Festival celebrates and promotes London as the gateway to the international design community and the world’s leading stage for design innovation.

London Design Festival has since earned the reputation as a key calendar moment of London’s autumn creative season, alongside London Fashion Week, Frieze Art Fair and the London Film Festival, attracting the greatest thinkers, practitioners, retailers and educators to the capital, in a citywide celebration.

Paul Cocksedge is an internationally acclaimed British designer, who has spent the last decade building a reputation for innovative design, underpinned by research into the limits of technology and materials. His catalogue of work spans design products, architectural projects, installations and sculptures, all infused with the sense of simplicity, joy and wonder that has come to characterise his work.

Having studied under Ron Arad at the Royal College of Art, Cocksedge was nominated for Designer of the Year by London's Design Museum in 2004, just two years after graduation. He established Paul Cocksedge Studio with Joana Pinho in the same year, and the practice has participated in design festivals around the world, adding a sense of playfulness to technologically ingenious sculptures and installations. He presented his first solo show at the Friedman Benda Gallery in New York in 2013, and in 2017 partnered with the gallery and Beatrice Trussardi to show an exhibition of pieces during Milan Design Week, made from materials excavated from the foundations of his own studio. Cocksedge is also working with Arup and Grimshaw on a 33-metre-long canopy for the Oman Botanic Garden, which will be one of the largest gardens of its kind in the world.

Cocksedge has collaborated with major brands including Swarovski and BMW, as well as private clients, and his work is included in collections at the V&A, MoMA and Vitra Design Museum. His work has received accolades from Wallpaper*, the Design Museum, Homes & Gardens and the German Design Council. 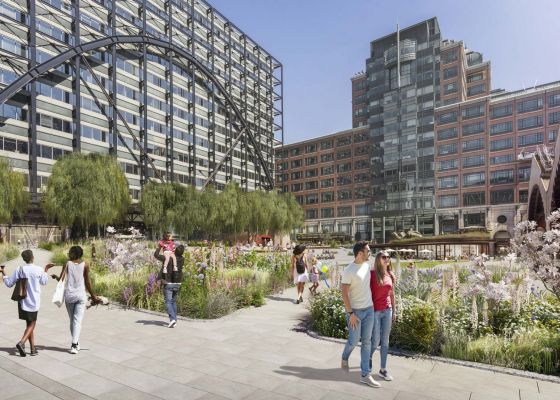