In the past 30 years, Broadgate has grown into a diverse community where world-class dining meets excellent everyday staples, from public sculpture to the latest in sports and wellness facilities.

With Broadgate’s collection of shops, bars and restaurants soon set to triple, this is the history that’s defined one of London’s most dynamic neighbourhoods.

1987: Torvill and Dean performed at Broadgate Ice Rink, the only open-air ice rink in Britain at this time.

1998: Originally conceived as two separate buildings when completed in 1988, 100 Liverpool Street and 8-12 Broadgate are now a single structure.

1990: The innovative Exchange House, designed by Skidmore, Owings & Merrill is complete. The parabolic steel arches support most of the structure’s weight.

1991: The completion of Broadgate and opening of Liverpool Street Station was marked by a visit on 5 December by Her Majesty The Queen.

2005: A range of public realm improvements were undertaken, introducing Gaucho Grill and the Lit Floor to Finsbury Avenue Square, as well as landscaping across Broadgate.

2019: Crossrail with links to Heathrow and beyond will be complete. 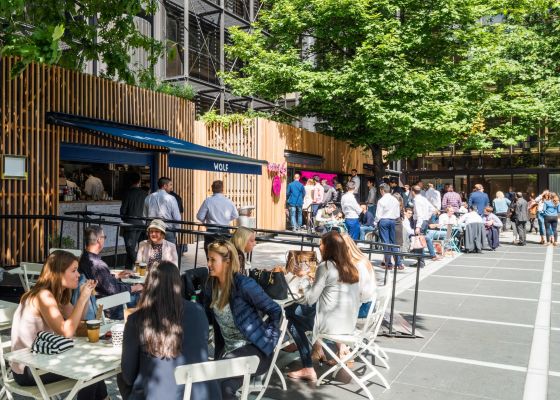